Yep, we'll be going away for another weekend camp in a few weeks.  Yes, we are going somewhere new, so keep checking back for my post after we get back.

UPDATE:
I have to report with great regret that we will not be getting away before Christmas for a weekend camp.  I'm sure you can appreciate when I say "There just isn't enough weekends between now and Christmas, we are running out of time".  Anyways, stay tuned we will get away soon....
Posted by Craig & Tracee at 11/04/2013 06:07:00 pm No comments:

Friday 18th October, 2013
We were supposed to be going out to Moffatdale with a few friends to a vineyard music festival this weekend, but found out dogs weren't allowed.  Now since we all had planned to go away, we decided we'd just change venue for the weekend.

I know you might say "again", but everyone was keen to go out to Proston Dam (Lake Boondooma).  We're all heading out today at different times and our mate Simmo and his partner Leigh put their hands up to go out early and pick an appropriate sized site for us all.   Hmmm, this should be interesting - Simmo picking a camping site for a tent & pergola, camper trailer, our Travelander and a Winnebago.......

The plan was again for Craig to shut up shop at 12pm, we'd load the food, clothes etc into the camper when he got home and we'd be on the road by 1pm - sounds good right.  And you guessed it, he didn't get home until 1.15pm, throw in filling up the 120lt water tank in the camper and we finally hit the road about 2pm.

Headed straight up the highway to Gympie and west onto the Wide Bay Highway - same as last time.  This time though we changed to parameters in the GPS for the trip out to Proston and didn't end up going through all the back roads. 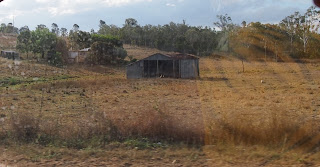 Arrived at 5pm thereabouts, checked into the Kiosk and spyed our tent & pergola (Simmo borrows our old tent & pergola so it's pretty easy for us to find him) straight down in front (we told Simmo to try and get the area we camped last time on the right of the boat ramp, it was taken but he grabbed the flat area to the left of the boat ramp for everyone).


After re-arranging the camp at bit as he'd spread out to secure the area, we parked and opened up the camper.  Won't worry about the awning this weekend, since Simmo has the pergola there.  Craig announced that one of mates Gazza & Tracey weren't going to make it this weekend as Tracey was ill (lucky really, because there was no way all 4 camps were going to fit into the area Simmo had picked!).  Our other friends Kurt & Chris arrived earlier and setup over the way a bit due to space and the fact we weren't there yet.  We'll sort out where they can fit tomorrow.


We had a bit of a laugh at Simmo when he was telling us about his exhausting afternoon.  Our old tent is one of those Touring tents with the extra bit at the back and it's really easy to setup, we've even marked the poles.  Apparently the tent erection was proving more then a little challenging for Simmo and the neighbour in the camper trailer had to come over and help/show him how to put the tent up.  We were just about rolling around on the ground laughing, so Craig asked Simmo if he worked out how to put the pergola up by himself - Simmo might have given him the evil eye at this point and said something like "I'm not stupid, the pergola was simple to put up".  Time for a few afternoon drinks with everyone (including Kurt & Chris) and then Craig & Simmo had a chat/drinks with the neighbours.

Probably should get the campfire going boys, bbq and salad tonight for dinner.

Finally dinner was ready to eat - poor dogs are starving waiting for us to have dinner.  Everyone was eventually fed and due to the quantity of drinks consumed and how late it was now, it was time for bed.

Wasn't too late this morning when most of us got up considering.  Coffee while sitting next to the lake and watching the boats coming & going, followed by Bacon & Egg rolls for breakfast.  The neighbours are leaving today, so Kurt & Chris can bring their Winnebago over to join us.

A bit of kayaking was the order for today.  First off Leigh took to the water with the assistance of Kurt (such a gentleman).  A few water skiers out on the lake this morning.  Must say it is a gorgeous day though, couldn't ask for a better day really.

﻿﻿Simmo's decided he'll go out on the other one, starting out he's very shakey and then kaplonk - seems the kayak tipped him out!

﻿﻿
It would seem everyone wants a go on the kayak, Craig's decided he'll use it to put some red claw traps out on the other side.  Yes he did loose one trap overboard while paddling, but recovered it.  Unfortunately though I can report there were no red claw harmed over the weekend by Craig or Simmo.  Kurt managed to catch one red claw, but donated back to the Lake for next time.  One day he'll catch some more....

Lunch was consumed after all this activity, then a bit of relaxing.  Of course there's afternoon drinks & nibbles to be had.  Then the boys need to get the campfire going, we're having my African Chicken Curry with Cous Cous tonight for dinner and we'll be cooking it over the fire on the tripod - I love cooking over the fire and dinner just tastes that much better don't you think.

We've got to go home today, but first thing is coffee by the lake again then  breakfast.  Simmo decided we needed to pack up and get going for some reason - the man doesn't know the meaning of relaxing weekend!  Craig ended up helping Simmo pack up the tent (so it was done properly), then we rolled up the self inflating mattress for him (again, so it was done properly), yes it does look like he's got us well trained doesn't it.  Eventually we closed up the camper, had a chat with Chris & Kurt, who were either going to stay another night at the Dam with their grandson or stop at a free camp for the night on the way back to the coast.

We convinced Simmo & Leigh to follow us home by the road less followed.  We let the Hema GPS determine our route home and we weren't disappointed.  It took us a different way again then the last time.  We were winding our way through some state forest tracks and came to an abrupt holt when we came across a huge tree fallen across the track and there was no way round it.  At this point in time, Simmo decided to tell us he only had 80klms of fuel left in his tank - we'll you can imagine what was said to him considering we had told him we'd be going offroad on the way home.  We had to turn around anyway and Craig was trying to work out if it was closer to back track to Goomeri or if there was somewhere else closer.  As luck had it when we got back to the bitumen, we noticed a sign to Nanango 15Klms.  We headed that way so Simmo could get fuel.

We tried to get lunch at the pub in Nanango, but unfortunately it's the chefs day off so no lunch is being served.  On the road again toward Yarraman and no we didn't take the bitumen.  We ended up on Old Yarraman Road, which eventually wound it's way through state forest, a nice little creek crossing, bit of slow crawling down some rough bits and eventually we popped into Yarraman.  Now it's definitely time for lunch at the Yarraman Pub (they allowed the dogs out the back and we were just in time for lunch).  Nice feed and friendly staff.